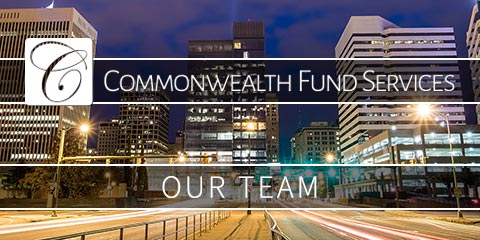 Our Team Commitment to integrity and desire to assist our clients allows Commonwealth Fund Services to succeed in the face of an ever-changing investment industry. Commonwealth prides itself on having a highly experienced management team with the capability to work within a diverse array of products including private equity, hedge funds and mutual funds.

As President and COO, Ms. Shupe is responsible for the all aspects of fund servicing. Her primary duties include Client Relationship, Fund Administration, Compliance and Regulatory Management.

Prior to joining Commonwealth in 2001, Ms. Shupe served as senior member of the executive management team of a large claims resolution facility and also worked as an Accountant for Deloitte & Touche for six years.

Ms. Shupe received her B.S. in Accounting from the University of Virginia and also holds a master’s degree is in Business Administration from Virginia Commonwealth University. She is a licensed Certified Public Accountant and holds Series 6, 27, 63 and 99 securities licenses.

Prior to joining Commonwealth, Ms. MacDonald was VP of Finance and Administration for a large not-for-profit organization. She worked for McGladrey and Pullen for five years, ending her service there as an audit manager.

Ms. MacDonald received her B.S. in Business Administration from the University of South Carolina and is a licensed Certified Public Accountant and holds Series 6, 63 and 99 securities licenses.

At Commonwealth, Mr. Bonaduce (MCSP, PMP) is primarily responsible for the support of all mission critical systems and the maintenance of vendor and partner relationships, as well as infrastructure planning, design and support.

Mr. Bonaduce has over 25 years’ experience in the Financial Services Industry and prior to joining Commonwealth in 2007, was VP of Product Development at PFPC and a Senior Project Manager at Franklin Templeton. In addition to Information Technology and Systems, his background includes Customer Service, Client Relations, Business Development, Risk Management and Operations Support.

Mr. Bogaert joined the Commonwealth team in October 2013. As Managing Director of Business Development, Mr. Bogaert is responsible for the management of the Sales Cycle with respect to new business as well as the growth of existing business. He is also President of the World Funds Trust.

Mr. Bogaert earned a degree in Financial Consulting and Planning from Purdue University and holds Series 7 and 63 securities licenses.

As CFS’s Managing Director of Corporate Operations, Ms. Giangiulio serves in a wide range of functions. Her responsibilities include all matters relating to the corporation’s development, human resources, accounting and policy.

Prior to joining us in 2007, Ms. Giangiulio was an Assistant Vice President, Branch Manager and Loan Officer at First Virginia Bank. She received her B.A. in Psychology from George Mason University. She currently holds series 6, 26, 63 and 99 securities licenses.